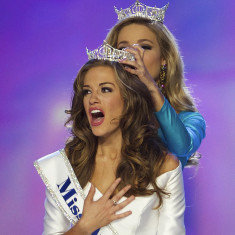 The Miss America 2016 pageant was held in Atlantic City, New Jersey on Sunday, September 13, 2015. During Miss America 2016, Miss America's CEO, Sam Haskell, apologized to Williams about the scandal in 1984, which resulted in her losing her crown. Then America watched as Vanessa Williams perform at the pageant.

The Top 5 finalists at the Miss America 2016 pageant were:

Miss Louisiana was asked about the Black Lives Matter campaign. This question was worded poorly, as the language in it provided the contestant with a ready-made diplomatic answer.

Since the question asked her whether the focus should instead be on all lives matter, this was a simple one to answer well and it's unsurprising that she nailed it.

Miss Mississippi was asked about the clerk in Kentucky who refused to grant same-sex marriage licenses. Every contestant had to be expecting this one, but Hannah made some great points in less than 20 seconds.

She pointed out that being elected to a job carries responsibilities, and this was a really good way to answer the question without offending anyone too much.

Miss Mississippi was a pleasant surprise amidst some other responses that were not as solid.

On her path to the crown, Miss Georgia was asked the least politically-charged question of the night about whether Tom Brady was guilty in "DeflateGate". She, unfortunately, could not hear the question and had to have it repeated, which surely made her nerves even worse.

She made an attempt at answering by saying she would need to be there to inspect the ball, but inspecting a deflated football does not necessarily mean Tom Brady deflated it.

This was a strange question, so I cannot really fault her for her best attempt at responding. Obviously, the judges loved her anyways!

Miss Alabama was asked about Donald Trump running for office (another unsurprising question, given that at the time the pageant aired, Trump still owned Miss America's biggest competitor, the Miss Universe pageant.) She was asked why Trump was leading in the polls, another softball question since most people are aware that Trump is a household name with a lot of entertainment appeal if nothing else.

McGuffin was strong in her convictions by responding that she felt there were much better candidates. Her answer has been picked up the national news, but Trump has not issued a statement in response yet. Overall, this was a good answer but could have come off a little strong.

Miss Tennessee received a question about funding for Planned Parenthood. This was a hard one to answer regardless of how you feel about it, and she started off on shaky ground. She closed with a good point about all the affordable health services provided to women across the country, but the wording of her answer could have been a bit clearer.

Miss South Carolina received a question about banning assault weapons. She was nervous, and it showed with an awkward laugh in an otherwise decent answer about gun violence. Did not really make a point that was memorable, although she looked truly beautiful answering it.

I know she has her supporters on this question, but it was my biggest disappointment of the night. She was asked about which woman should be put on the $10 bill and she said Ellen Degeneres. This would have been a fine answer if the question was about an inspiring woman or a role model for today's teens, but there are so many other incredible women in US history (who already meet the qualification of being deceased). For future reference, see the brief list below of women you might want to research further if ever asked about this topic:

Interestingly enough this exact question was asked at Miss USA 2015 just a few months before the airing of the Miss America pageant.