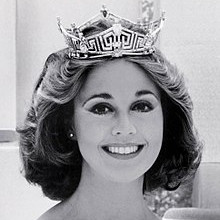 Susan Perkins Botsford, a Middletown, Ohio native is known for her service as Miss America 1978 as well as throughout her life.

She is also known for her professionalism as a singer, spokesperson, and television reporter. After her reign, Susan was a featured performer on several Miss America telecasts, emceed numerous state pageants, sang professionally and worked as a reporter for the ABC affiliate in San Francisco.

Susan has participated in many volunteer activities supporting American veterans. Susan is currently married, has two children and resides in Boston and Cape Cod.

She was Miss America 1978, the fifth Miss Ohio to win the national title. During the competition, she won the preliminary talent award for her performance of "Good Morning Heartache."

What is the Occupation of Susan Perkins Botsford

Susan was chosen to judge the 2018 Miss America competitions throughout preliminary week. In 2009 Susan toured Iraq with two former Miss Americas in support of American veterents through engaging activities. Susan has also showed her support for Cara - Miss America 2018, through signed statements shared on Facebook,, in agreement with the #standwithcara movement.

What is the Nationality of Susan Perkins Botsford