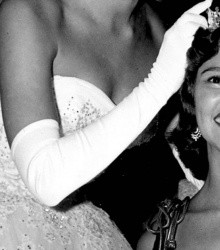 Mary Ann Mobley was Miss America 1959 and the first Mississippian to achieve this honor, winning the national talent award.

Mobley was born in Biloxi, Mississippi. After serving her reign as Miss America 1959, Mobley embarked on a career in both film and television. She signed a five-year contract with MGM. She made her first television appearances on Be Our Guest in 1960, followed by five appearances on Burke's Law from 1963 to 1965. She went on to make multiple appearances on Perry Mason, Love, American Style, and Fantasy Island. She played a recurring role as Maggie McKinney Drummond on Diff'rent Strokes in the final season of the series having taken over the role from Dixie Carter She also played Arnold’s teacher on Different Strokes during season 2 episode 24. She later guest-starred as Karen Delaporte, a snide head of an historical society who crossed swords with Dixie's character, Julia Sugarbaker, in Carter's later series, Designing Women. She made two films with Elvis Presley in 1965, Girl Happy and Harum Scarum. They were friends, as they were both from Mississippi. Elvis liked that Mary Ann was a true Southern lady.

She was given the Golden Globe Award for New Star of the Year – Actress in 1965. She was active in many charitable causes and was awarded the Outstanding Young Woman of the Year Award in 1966 by Lady Bird Johnson.

Mobley also made occasional appearances on Match Game as one of the celebrity panelists from 1973 to 1977. From 1984 to 1988, Mobley joined husband Gary Collins by co-hosting the Pillsbury Bake-Off on CBS.

Her last TV acting appearance was in 1994 on Hardball. She appeared in the documentary film Miss America which PBS aired as the January 27, 2002 episode of American Experience.

Mobley died at her home in Beverly Hills, California, on December 9, 2014, at age 77, from breast cancer.

Mobley joined husband Gary Collins as co-host of the 1989 Miss America pageant, in September 1988 in Atlantic City, New Jersey, the 30th anniversary year of her own Miss America pageant victory. Was a member of Chi Omega sorority at the University of Mississippi. In 1966 she was the female guest star on the first two-part episode of Mission: Impossible, in the episode “Old Man Out”.