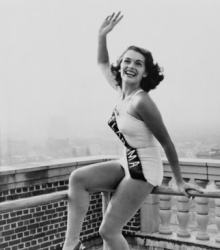 Jacque Mercer found herself growing up on the X-Bar X-Ranch in Litchfield, Arizona, and the last Miss America to be born somewhere other than a hospital. In her early years, Jacque won a 4H ribbon for her radishes, and was eighth grade valedictorian. At fifteen, she decided that she'd also like to be Miss America one day.

"It was about three years before I won that I first started collecting information on the subject," she once said. "It was just dependable old

"From the first, I didn't know where to turn, so most of my early research just involved clippings from relatives from other parts of the country"

Tiny in stature, Jacque studied clothing and looked for patterns that gave the illusion of height. She practiced her dramatics endlessly and decided upon the potion scene from "Romeo and Juliet" as she thought it radiated class. She also dutifully noted that in her spare time she raised Maltese dogs. To look animated to the judges she developed a plan with Miss Arkansas to recite three letters of the alphabet and wait for a response of the next three letters. By the time she arrived in Atlantic City, she had made competition an art form, won the Miss

America title outright, and later even published a book about her findings.

"Seven people saw me off. When I came back (with the title) a squadron of planes met mine at the Arizona state line and escorted me to Phoenix."

While still holding the title, Jacque married. Unfortunately, the marriage ended very quickly. Later she became very instrumental in seeing that she would be the last Miss America to marry during her tenure. At Jacque's urging, pageant officials changed the rules so that Miss America was no longer permitted to marry while holding the title.

Jacque graduated from Arizona State University, taught school, married All-American Football Player and advertising executive, Dick Curran and had two children, Richard Jr. and Shannon. While raising the children, Jacque entered into business with her husband and received numerous copy-writing awards throughout her career. Jacque also remained active in community work during her life, including starting a debutante ball and a girl's club, until her passing in 1982. 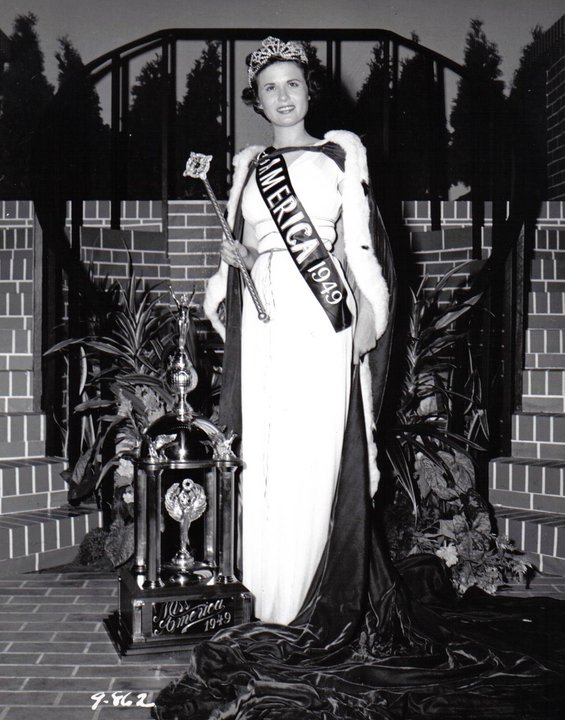 Had ancestors including President James Polk and Daniel Boone. She is mentioned several times in the 1997 Philip Roth novel, American Pastoral. She married and divorced her high school sweetheart, Douglas Cook, during her reign as Miss America. After this, a rule was enacted which requires Miss America contestants to sign a pledge vowing they have never been married or pregnant.