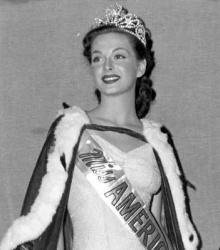 Buferd attended the University of California, Los Angeles. One of the sixteen finalists she defeated in the Miss America 1946 pageant was future Academy Award-winning actress Cloris Leachman.

Marilyn used her scholarship money to study languages at the University of Berlitz in Rome. She soon became employed modeling prototype bikinis on the runways of Paris, then moved to Italy where she appeared in numerous Italian films with famous directors like Roberto Rossellini and Oscar winner Pietro Germi.

In 1948, she modeled for top fashion designers and jewelers in France and Italy.

In 1951, Marilyn married Franco Barbaro, a former submarine commander under Mussolini. Later that year, back in Santa Monica, she gave birth to her only child - future Austin Chronicle publisher Nick Barbaro. Divorced soon after, Marilyn returned to California, where she raised her son while appearing in films and TV shows. Later married to plumbing magnate Milton Stevens, Marilyn supplied critical financial backing to the respected Austin Chronicle in the early years.

Marilyn Buferd died of pancreatic cancer at age 65 in Austin, Texas, on March 27, 1990. Her son, Nick Barbaro, is publisher of The Austin Chronicle and co-owner of South by Southwest. 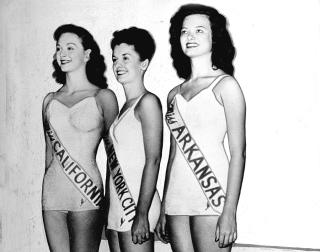 UCLA co-ed and Miss California when she took the Miss America title in September 1946. One of the sixteen finalists she defeated in the Miss America 1946 pageant was future Academy Award-winning actress Cloris Leachman. Appeared in several movies.