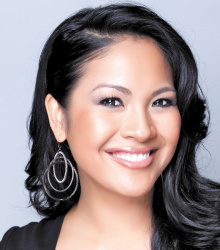 Angie is the first Asian American and the first teacher to become Miss America. Angie took her "classroom" across the country, educating the nation about the need for building character in our schools and in our homes. She traveled approximately 20,000 miles a month on her national speaking tour entitled, "Character in the Classroom: Teaching Values, Valuing Teachers," challenging educators, parents, and students to make character education an integral part of their school's every day culture and curriculum.

During her year, she met twice with President Bush to discuss issues concerning education. In 2003, Angie and her husband were invited back to the White House to attend a State Dinner with President Bush and the First Lady, honoring Philippine President Gloria Macapagal-Arroyo. Angie actively supported an amendment to President Bush's H.R.1 Education Bill, written by Congressmen Wamp and Etheridge, urging the President and Congress to support an increase in funding for character education initiatives from $8 million to $50 million per year. She addressed legislators, governments, schools and members of the community, inviting them to take the initiative in lighting the way for a brighter tomorrow for our country and all Americans.

Angie was the spokesperson for First Hawaiian Bank from 2002-2005, and is a Host/Writer/Producer on a statewide TV show in Hawai'i, Living Local with the Baraquios, which has won numerous Telly Awards since its inception in 2004 . She was appointed by President Bush, in June 2006, to be a member of the President's Council on Service and Civic Participation. In 2001, she founded a 501(c)(3) non-profit organization, the Angela Perez Baraquio Education Foundation, which was created to promote character education and provide scholarships and grants for students and teachers.

Angie utilized her Miss America scholarship money to pay off her Bachelor's and Master's Degree, as well as her California state Clear Teaching Credential.

In June 2002, Angie married her high school sweetheart, Tinifuloa ("Tini") Grey. The couple has three sons and one daughter. 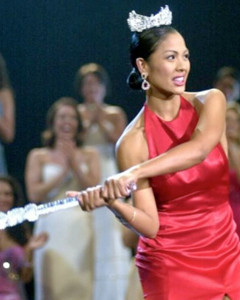 Was the first Asian American, first Filipino American, and first teacher ever to win the pageant. She is the eighth of ten children. Founded her own non profit.