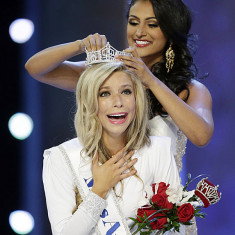 Miss America 2015 (the 88th Miss America pageant) was held at Boardwalk Hall in Atlantic City, New Jersey on Sunday, September 14, 2014. Miss America 2014, Nina Davuluri crowned the winner, Miss New York, Kira Kazantsev, making it the third consecutive year that a Miss New York won the Miss America crown; New York thus became the first state to have a Miss America winner three years in a row. It was broadcast on ABC, UniMás, and streamed to mobile devices via the WatchABC app as well as Xbox One consoles via its live TV functionality. Tickets for the 2015 Miss America competition went on sale in spring 2014.

The Top 5 finalists at the Miss America 2015 pageant were:

The Miss America evening gowns of the 2015 pageant were stunning. There was a range of styles and colors. While all of the girls had to wear Tony Bowls/Mon Cheri during the final night they were allowed to wear whatever they desired for Prelims.

"It's interesting how certain contestants wore the gown they won their state title in over the custom gown they created with Tony," Steven Roddy, founder of Pageant Planet and Brand Manager for Tony Bowls, said. "But, there can be a 'one-two punch strategy' by presenting two separate gowns to judges. The switch up keeps things fresh." With that being said, there were a select few who really stood out of the crowd.