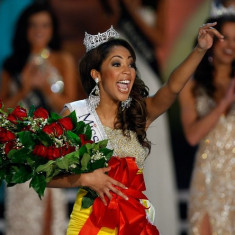 83rd Miss America Pageant, Held at the Theatre for the Performing Arts of the Planet Hollywood Resort and Casino in Las Vegas, Nevada on January 30th, 2010.
Fifth-year Las Vegas hosted the pageant.
Aired on TLC
53 Entrants
Hosted by Mario Lopez

This was the first year Puerto Rico had sent a representative to Miss America since 1961 with Miss Puerto Rico 1962, Rosita Giusti. Miriam Pabon won a Preliminary Swimsuit Award but did not make the semi-finals. However, she found success with other systems. She was 3rd runner-up at Miss World Puerto Rico 2008 and Top 12 at Miss International 2008.