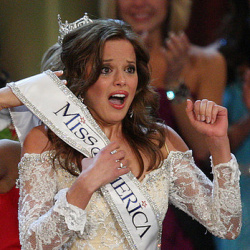 The Top 5 finalists at the Miss America 2009 pageant were:

82nd Miss America Pageant, Aired by TLC.
The pageant was Held on January 24th, 2009 at the Theatre for the Performing Arts at the Planet Hollywood Resort and Casino on the Las Vegas Strip in Paradise, Nevada.
The fourth time the pageant was held outside of Atlantic City, New Jersey.
Four contestants were awarded the "Golden Sash" on the TLC Series. "Countdown to the Crown". They were Katie Stam, Miss America 2009, Miss Georgia Chastity Hardman, 1st runner-up as well as Miss Alabama, Amanda Tapley and Miss South Dakota, Alexandra Hoffman, who both placed in the Top 15.
Miss Colorado, Jamie Dukehart-Conti, was a cheerleader for the Denver Broncos.
Miss Georgia, Chastity Hardman, Second African-American to represent Georgia at Miss America. She was 1st runner-up and won a Preliminary Talent Award.
Miss Minnesota, Angela McDermott, Performed the National Anthem at the Opening of the 2008 Republican National Convention in Minnesota.