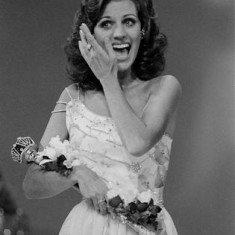 During the 58th Miss America pageant the telecast increased from 1.5 hours to 2 hours and every state titleholder was guaranteed a scholarship of at least $1,000.

According to IMDB there were 60 million people who watched the broadcast on CBS. This was also the first Miss America pageant to not appear on NBC. The pageant was emceed by Bert Parks and Phyllis George, Miss America 1971.