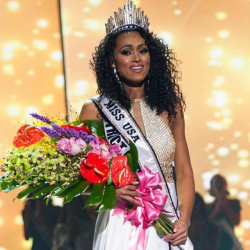 This has been a crazy busy week for the Miss USA ladies since registration and fittings this past weekend. After that, the queens went to hair and makeup and had their first photoshoot with the pageant's official photographer, Georgina Vaughan. The ladies later had a welcome event that night where current Miss USA 2016 Deshauna Barber stunned in her Sherri Hill jumpsuit.

The ladies have had the opportunity to do several photoshoots so far. They shot the swimwear look for Yandy where each girl got to chose a unique swimsuit that represents her style to model. The contestants also had a photoshoot in the Valley of Fire State Park where they modeled dresses, fitness wear and more. Another on-location photoshoot was held at the Libertine Social. Finally, the ladies had their glam shots photographed by the official Miss USA photographer, Georgina Vaughan.

Among all of the fun photoshoots, the contestants had the chance to get involved with a community organization and the national pageant's platform, Best Buddies International. The women were all smiles while they were able to interact with the buddies and do several activities with them.

Exploring Las Vegas is one perk of going to Miss USA this year. The ladies were able to see the many murals in downtown Las Vegas before heading out for the evening. The tour did not stop there. The queens even went to see the Jabbawockeez, Nashville Unplugged and Michael Jackson ONE while they were exploring the city.

After all the fun was over, it was time to get to work in rehearsals early this week. The girls were seen practicing their opening number with Cirque du Soleil. If rehearsals are any indication, the show will have us all glued to our seats.

Yesterday marked the start of competition as the contestants completed their private interviews with the judges panel.

Some Announcements and News

There have also been some major announcements since the pageant week has begun. After Orientation, the announcement was made that there would only be a Top 10 and Top 5 called this year. However, at rehearsals, the girls were seen practicing a Top 3. It is rumored that there will now be a Top 10, Top 5 and Top 3 on finale night.

Also announced this week were the judges for both preliminary and telecast competition. The telecast judges are Brook Lee, Carson Kressley, Hamila Aden, Janet Mock, Jeannie Mai and Nancy Lublin. Controversy struck with the announcement of Hamila Aden as a judge because Aden competed in her own Miss USA state pageant just this past year.

The performers and hosts for the final night were announced as well. We'll see special performances from Pit Bull, Brett Eldridge, and Michael Jackson ONE Cirque du Soleil. Our hosts for the evening will be Julianne Hough, Ashley Graham and Terrence J.

Be sure to tune in tonight at 7 p.m. PT on Miss USA's live stream to see the contestants compete in their first onstage preliminary competition!

The judging panel for Miss USA 2017 has officially been announced and it is an exciting panel indeed. The panel is made up of six women and one man from backgrounds in business, pageantry, modeling and entertainment.

Nick Light works at Sony Music Entertainment as the Senior Vice President of Artist Development and Touring. He is a giant in the music industry with his production of major tours and special events for some well-known entertainment companies.

Carole Gist is a TV host and model. She made history as the first African-American woman to be crowned Miss USA. She represented her home state of Michigan as Miss Michigan 1990 and won the Miss USA 1990 title.

Brook Lee is certainly a well-known name in pageantry as she was the first Native Hawaiian to take home the Miss Universe title. After passing along the crown, Brook has worked all over the planet as a host, writer and producer. This year is special to her as it is the 20th anniversary of her Miss Universe win.

Maura McGreevy works at IMG as the Senior Vice President of Corporate Communications. IMG is a global leader in all things sports, fashion, media and events. It currently operates in more than 30 countries worldwide.

This 19-year-old made international news recently when she stayed true to her faith by wearing a hijab and burkini when competing for the Miss Minnesota USA pageant. Since her time as a competitor, she's been making moves in the fashion industry as a model.

Vanessa Gringer works at WME|IMG as the Senior Director of Commercial Endorsements and Business Development. In this role, she identifies and coordinates non-traditional licensing and branding opportunities for talent across the globe.

Nancy Lublin is the Founder and CEO of Crisis Text Line, which is one of the first "big data for good" organizations and has processed over 36 million messages in three years. She also took DoSomething.org from bankruptcy to the largest organization for teens and social change in the world.

Question: "Do you think affordable healthcare for all U.S. citizens is a right or a privilege and why?"

Answer: "I’m definitely going to say it’s a privilege. As a government employee, I am granted healthcare and I see firsthand that for one to have healthcare you need to have jobs. So, therefore, we need to continue to cultivate this environment that we are given the opportunity to have healthcare as well as jobs to all the American citizens worldwide."

Question: "Social media allows us to share every aspect of our lives, but it can also cause us to be hyper aware of how we measure up to others. Do you believe that social media is ultimately a positive or a negative?"

Answer: "With social media, I believe it has given us so much power in this world, but with great power comes great responsibility. I have seen both ends of social media. For me, it has been one of the most empowering experiences because I have met so many empowered women, but at the same time, I have been a victim of cyberbullying like many of the contestants standing with me on this stage. Social media is again, a privilege. It is something you have to be careful of, you can’t just say anything because you’re anonymous. Once we realize that, that’s when we can truly live in a better world for everyone."

Question: "Suicide recently became the second-leading cause of death among teenagers. What actions would you take as Miss USA to help struggling teenagers?"

Answer: "Most of those who commit suicide are those who feel like their voices won’t be heard; that their problems will not be overcome. I believe what we can do to really eradicate that is to create an environment where our teenagers and those who feel that they need help are... their voices are heard and that we are there for them. We need to set up counseling and other resources for these people so that we can get rid of those suicide problems."

Miss Illinois USA 2017, Whitney Wandland Question: "Advocates for women’s rights have been leading the conversation this year. Which specific issue regarding women’s rights is most important to you?"

Question: "As Miss USA, you’ll be representing our country worldwide. How would you like the global community to view the United States?"

Miss Arizona USA 2017, Tommy Lynn Calhoun, was stunning in this detailed, fitted black gown. We just love the intricate beaded design of the gown. Its perfect fit showed off Calhoun's figure perfectly. By far, it was a standout gown!

Miss District of Columbia USA 2017, Kara McCullough, was a vision as she graced the preliminary stage. Between the natural hair and the flowing nature of the gown, McCullough looked like a goddess on stage. The fully beaded halter neck provided a beautiful contrast from the stoneless bottom of the gown.

Miss Illinois USA 2017, Whitney Wandland, was gorgeous in her gold, fringed gown. This dress bares a strong resemblance to Miss USA 2016's gown, and we were loving the nostalgia we felt from it.

Miss Nevada USA 2017, Lauren York, had such a unique gown for the preliminary competition. The right side was completely bare and mostly see-through. The dress had horizontal and vertical lines crossing throughout the right side as well.

Miss Nebraska USA 2017, Jasmine Fuelberth, was gorgeous in her preliminary evening gown. We loved the fit of the gown and the unique beading of the top. The top beading including a variety of color in a floral and striped pattern.

Miss Hawaii USA 2017, Julie Kuo stood out in a bright orange evening gown. The bright orange color and the flow of her skirt and cape attachments had us thinking of an island goddess. We were definitely dreaming of sunshine and warmer weather from Kuo's gown.

Miss Tennessee USA 2017, Alle-Sutton Heathcoat, stunned in her champagne-colored gown. This year was all about intricate liquid beading with ornate details, and Heathcoat's dress was no exception. She conveyed the pageant's motto, "Confidently Beautiful," with her glide in this gorgeous gown.

Miss Texas USA 2017, Nancy Gonzalez, stunned in this gold, beaded gown. Between her flawless tan, her wavy hair and the gown, we were seeing a golden goddess on stage. The full sleeves with a plunging neckline created a perfect balance of sexy and modesty.

Miss Virginia USA 2017, Jacqueline Carroll, looked elegant in her black and white ball gown. We saw very few ballgowns this year at Miss USA preliminary competitions, which made Carroll's ball gown stand out even more. The stark contrast between the black top and white skirt pulled our eyes right to her.

Miss Arkansas USA 2017, Arynn Johnson, shined from head to toe in this fully beaded white gown. Not only is the dress covered in bling, the skirt is very intricately detailed with clusters of jewels and a closing pattern. She looked stunning on stage!