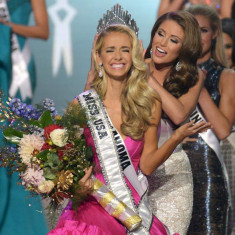 In the days leading up to the 2015 Miss USA pageant, NBC, Univision, judges and emcees cut ties with the pageant. These actions were due to a statement made by Donald Trump, co-owner of the Miss USA organization. Trump's statements were about illegal immigration on the Mexican border. Thankfully, Reelz Channel picked up the pageant's finals competition telecast.

Notable to mention, during the Miss USA 2015 pageant, all of the judges were former Miss USA's and this was the first time that Delaware has made the Top 15 at Miss USA.

Here are the Onstage Questions that the contestants who made it to top 5 were asked:

Miss Oklahoma USA's question was from Judge 8, Brooke Lee, and was "The confederate flag, excessive force by police, and same sex marriage are all recent hot button issues in our country. What do you think will be the next that we need to talk about on a national level?"

Miss Oklahoma USA responded with, "I think we still need to talk about race relations in this country. We have not solved this issue. We are still having problems and we keep hearing about new issues that are coming up. We really need to work on being an accepting society and being a society where every single person, no matter your race, no matter your gender, is given the same rights and privileges and opportunities."

Miss Texas USA's question was from Judge 2, Michelle Mclean-Bailey, and was "Last year, CEOs in the United States made around 300 times as much as the average worker's salary. Should the government impose boundaries on salaries of executives?"

Miss Maryland's question came from Judge 3 Nana Merriwether and was, " The United States has agreed to formally reopen it's embassy in Cuba. Do you think that this change will be a positive one for both countries?"

Maryland: "I think that it will be a positive trade. I think that it's an awesome thing to open our doors to all countries, all nations and to mend our relations with everyone. We should not be holding onto old grudges. We should be moving forward and accepting each other and loving one another and moving forward so that we can create better relations, better society and govern our countries better that way."

Before we talk about Brittany's question, let's talk about her mini-conversation before the question. Brittany showed such excitement and enthusiasm for being in the top 5 that it brought a smile to my face.

Brittany McGowan chose Judge 1 Crystle Stewart and her question was, "What would you do to improve race relations in the US? Please be specific."

Brittany's answer was, "What I would do to improve race relations in the US is get more races grouped together and be with each other in a non... I think what we did to do is bring... we need to be more accepting of each other and we need to bring people together. That's what I think we need to do."