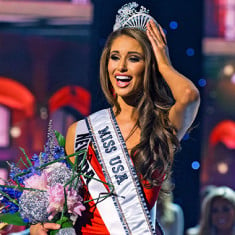 She was asked if she would agree with a recent New York Times story that suggested narcissism was an epidemic that was causing today's youth to turn into a "hyper-entitled, self-absorbed generation." She said that she believed that technology has made it possible for youth to post pictures and videos of themselves and said: "That kinda, to me, seems narcissistic."

Allie LaForce asked if college was relevant anymore given that it's hard to get a job after graduation. Audra answered by saying that "I do think going to college is relevant at this point. I know my parents' generation, there was are a lot of people who are extremely successful who never did get a college degree, but in this day and age I know it's extremely hard to find a job, even after four years of college. So I do think it's extremely important to go and get your education and, I guess, further your education after high school."

Randy Couture wanted to know what separated her from the other contestants. First of all, this question was such a softball compared to the one about swapping prisoners, so she should have knocked this out of the park.

"Well, I have to tell you that being up here is an honor to be with these women. They are absolutely phenomenal and I've really gotten to know them over the past couple weeks. However, I think that I'm bringing something new to the table. My father passed away with complications of Crohn's and colitis, and I'd really love to bring that forward, and raise money and awareness, and bring it home for my dad."

Rumer Willis wanted to know why Nia thought that college sexual assaults have been kept so quiet and how colleges can respond to that (and by the way, really? This one also makes the "what makes you unique" question seem like such a easy question).

She responded: "I believe that some colleges may potentially be afraid of having a bad reputation and that would be a reason it could be swept under the rug, because they don't want that to come out into the public. But I think more awareness is very important so women can learn how to protect themselves. Myself, as a fourth-degree black belt, I learned from a young age that you need to be confident and be able to defend yourself. And I think that's something that we should start to really implement for a lot of women."

I feel bad for her because she clearly got the most difficult question of the night being asked about whether the government should have released 5 Guantanamo Bay prisoners for American POW Bowe Bergdahl.

Karl Malone gave her an open 30 seconds to say whatever she wanted to political leaders.

Her response: "I say that we should lead our country by faith. For me, I know that when I go to bed at night I pray for my family as well as the leaders of the country. I think if we pull together and work together, we are able to make more of a difference than setting ourselves apart. That's what I would say."