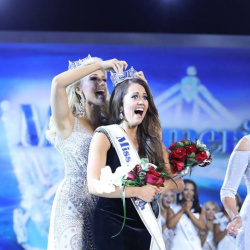 In addition to Cara Mund making history, Miss America changed history by changing the structure of the pageant. Miss America 2018 pageant introduced something special to the competition. The “Personality Question.” While the Personality Question was not scored judges did get a sense of the personality behind the contestants. The overall feeling of this portion was playful and it seemed to lighten up the contestants. Here are the questions that they were asked.

Question: “Please fill in the blank. I know a lot of people love it, but I think ___ is totally over-rated.”

Answer: “I know a lot of people love it but I think… *long pause* Goodness gracious… I think rompers are totally over-rated!”

Question: “Miss America competes in swimsuit, gown, talent, intelligence… what would be the categories for Mr. America?”

Answer: “I think we should also have a swimsuit portion for the Mr. America competition. Um and only the best bods win… but that’s just my personal opinion. Chris, you want to compete?”

Question: “Right now, the handsome fellow standing next to you, Chris Harrison, offers you the chance to be the next Bachelorette. Would you take it?”

Answer: “Alright Chris, don’t be offended. I don’t think I would take it. I don’t know. I love watching the show and it’s really entertaining but it’s not always the best… chances of staying with who you end up with on "The Bachelor," looking at what’s happened recently with Ben and Lauren who were my people.”

Question: “For a date, all things being equal, of course, if you had to choose between an athlete, a doctor or a movie star, which one would you choose?"

Answer: “Wow, that is a fabulous question. I would have to go with the doctor because intelligence is so attractive in a man. Thank you so much!”

Question: “You know you’re going to write it someday… What would be the title of your autobiography?”

Answer: “The title of my autobiography would be “Diversity Matters” and I am lucky enough to be the author of a children’s book entitled “Diversity Matters,” which is my personal platform and it is why my talent Bollywood is so important. I not only come from a diverse background but I also embrace another culture as well. To bring that back to the stage, especially in front of you, was the highlight of my life.”

Question: “What’s the number one thing on your bucket list?”

Answer: “Honestly, to get to Miss America and make it past the Top 10. We’ve only had three girls ever make it this far so it just proves that it doesn’t matter where you come from geographically… if you have the ability to do it and you dream it, you can do it and that’s exactly what was on my bucket list. And you helped make it come true! Thank you.”

Question: “You’re waiting at a red light at 4 a.m. There isn’t a car in sight. Do you run the light?"

Answer: “My dad used to be a police officer so secretly no, but in D.C., I ride with Uber so it’s their choice.”

Question: “There are multiple investigations into whether Trump’s campaign colluded with Russia on the election. Well, did they? You’re the jury: guilty or innocent? And please explain your verdict.”

Answer: “Right now, I would have to say innocent, because not enough information has been revealed. We are still investigating this and I think we should investigate it to its fullest extent. And if we do find the evidence that they have had collusion with Russia, then they should — the justice system should do their due diligence and they should be punished accordingly.”

Question: “Last month, a demonstration of neo-Nazis, white supremacists and the KKK in Charlottesville, Virginia, turned violent and a counter protester was killed. The president said there was shared blame with ‘very fine people’ on both sides. Were there? Tell me yes or no and explain.”

Answer: “I think that the white supremacist issue, it was very obvious that it was a terrorist attack. And I think that President Donald Trump should have made a statement earlier addressing the fact and making sure all Americans feel safe in this country, that is the number one issue right now.”

Question: “One hundred ninety-five countries signed the Paris Agreement, in which each country sets nonbinding goals to reduce man-made climate change. The U.S. is withdrawing from the agreement, citing negligible environmental effects and negative economic impact. Good decision? Bad decision? Which is it and why?”

Answer: “I do believe it’s a bad decision. Once we reject that, we take ourselves out of the negotiation table and that’s something that we really need to keep in mind. There is evidence that climate change is existing, so whether you believe it or not, we need to be at that table and I think it’s just a bad decision on behalf of the United States.”

Question: “A recent poll found slightly over half of Americans favored leaving Confederate statues in place, while others want them removed. Keep them or get rid of them? What’s your vote and why?”

Answer: “I don’t think that the answer is to get rid of these statues. I think the answer is to relocate them into museums because we are truly defined by our country’s history and I don’t think it’s something that we need to forget. We need to always remember it and honor our history of America because it truly makes us who we are as Americans. So they should be moved to museums.”

Question: “Given the evidence that concussions from playing football can cause brain damage, would you support legislation that outlaws full-contact football in elementary and high school? Yes or no, and why?”

Answer: “I do believe that I would. As someone who wants to go into the medical profession, I know how important it is to keep our kids safe so that they can have a quality education. And when they’re getting to high school and they’re playing these sports, they’re able to do so at the best of their ability and they’re not limited because they chose to play football at a young age.”

Congratulations to the newly crowned Miss America 2018! We are excited to follow your year of service and know you will represent Miss America well.

This week, the Miss America Organization named Josh Randle as President and Chief Operating Officer (COO). At 29 years old, he is the youngest ever to be named the president of the organization. Randle has served for two years at the organization's COO.

Before his role with the Miss America Organization, he served as the National Executive Director for The Duke of Edinburgh's Award Foundation in the United States. This foundation was set up as a charity program from the British royal family.

Randle is looking forward to his new role.

" incredibly honored and humbled to serve in this capacity," Randle said. "Miss America is a movement of empowering young women to pursue an education and achieve their dreams, and I am excited to help expand and further that important legacy as we approach our 100th anniversary."

Eli wrote, "I am truly honored and grateful for the opportunity to work for this iconic organization. I very much look forward to working with Lynn, Sam and Josh to promote and enhance the Miss America brand for many years to come."

It seems as though both men will work closely with Sam Haskel III, who is the current chief executive officer, and Lynn H. Weidner, who serves as the chairman of the board of directors for the Miss America Organization.