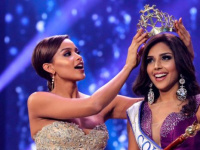 The telecast last Monday became one of the most viewed events of the year. The coronation night held in Gonzalez’ home city, Cartagena, was participated by 23 outstanding women representing each region across the country. The 11-day competition was fierce and tested the contestants’ physical, mental and social abilities through a series of battle event. On the final election night, the ladies paraded on stage with their costumes, swimsuits and evening gowns towards the announcement of the top 10 finalists.

Laura González Ospina represented the beautiful city in the North of Colombia. She was wearing a stunning magenta gown designed by Hernán Zajar before the final announcement, which awed the judges and the audience. Gonzalez possesses all the qualities worthy to be chosen as Colombia’s representative of national beauty and virtue. She is expected to be the country’s ambassador to the world and will render humanitarian work to all corners of Colombia throughout her reign.

The 21-year old señorita stands 5 feet and 5 inches tall and speaks both English and French in addition to her native language. She enjoys singing and reading and was very fluent in the interviews as reported by The Sun news company. Gonzalez impressed the judges with her eloquence and her advocacy in saving the environment and concern in animal welfare.

The stunning 21-year old beats other contestants with her on-stage presence. Photo: The Sun UK

The South American country is famous for producing the most beautiful contestants in international beauty pageants. Its representatives make it to the top 10 finalists almost every year and are regarded to be tough competitors to beat. One of their most notable Miss Universe queen is Paulina Vega Dieppa, Miss Universe 2014. Ariadna Gutiérrez Arévalo also became legendary the year after because of the mix-up with Miss Philippines Pia Wurtzbach at the Miss Universe 2015 coronation night.