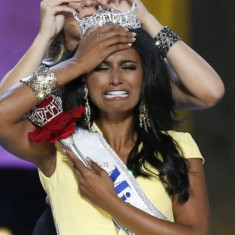 Previously held in the month of January in the Las Vegas Strip's Theatre for the Performing Arts (Planet Hollywood Resort and Casino), the Miss America 2014 Pageant returned to both its original location and September broadcast after nine years. Prior to the pageant, the partially restored Boardwalk Hall Auditorium Organ was played for the first time in more than 40 years. The program was co-hosted by Chris Harrison and Lara Spencer and was broadcast live on ABC. The panel of celebrity judges for the top 15 finalists were: Deidre Downs Gunn, Carla Hall, Barbara Corcoran, Amar'e Stoudemire, Lance Bass, Joshua Bell, and Mario Cantone.

In the final moments of the Miss America 2014 pageant, Miss California Crystal Lee and Miss New York Nina Davuluri were the last contestants left on the stage. They were approached by co-host Lara Spencer who asked how they were feeling at that moment. Davuluri stated that she and Lee were "both so proud. We’re making history right here, standing here as Asian-Americans.” In a later interview with NPR's Michel Martin, Davulri described the moment as a, "very surreal, out-of-body experience, being there in the final two. I was holding hands with Miss California, Crystal Lee, and we were both standing there at such a historic moment - two Asian-Americans who were going to take the title and to be a new symbol of hope and encouragement."

The Top 5 finalists at the Miss America 2014 pageant were:

Miss Mississippi wowed in a black Catalina swimsuit and managed to capture the first Lifestyle and Fitness award for the Miss America 2014 competition.  She receives a $1,000 scholarship and my jealously for those abs.

Miss New Hampshire garnered the first Talent award of the Miss America preliminaries with her rendition of "Don't Rain On My Parade" from the musical Funny Girl.  Her voice was phenomenal and she acted the song superbly, which won her a $2,000 scholarship.

Miss Oklahoma also competed in a black Catalina swimsuit in order to win her preliminary Lifestyle and Fitness award.  She was the appropriate level of bubbly for the stage and she managed to take home a $1,000 scholarship in a difficult group.

Miss Minnesota performed her rendition of  Wieniawski's "Scherzo and Tarantella" on the violin on the second night of preliminary competition.  She played the highly technical piece flawlessly, winning a $2,000 scholarship for her talent performance.

Miss Georgia, whose platform focuses on heart health, showed off her healthy body to win a $1,000 scholarship on the final night of the preliminary competition.  She was completely confident showing off her quads and obliques, earning her the award.

Miss Florida won her talent group (probably the strongest of the three groups) with her twirling routine to "Big Noise From Winnetka," after having torn her ACL earlier in the day.  Some might think this was a pity vote (haters gonna hate), but no one who watched the performance doubts that this girl earned every single cent of the $2,000 scholarship and truly wowed the audience.

Miss California Crystal Lee and Miss Mississippi Chelsea Rick both won $5,000 STEM Scholarships, which were introduced this year as a part of Miss America's new STEM platform.  These scholarships are for contestants who are pursuing a career in STEM and also make promoting women in STEM a priority.  Miss California's platform is about women in STEM and was inspired by her mother, who was the only female programmer in her department for nearly twenty years.  Miss Mississippi hopes to become a neurologist for her career.

The Quality of Life Award is given to contestants who excel in their community service.  The nominees are announced at the arrival ceremony, with the winners announced later in the week.  The 2nd Runner-Up was Miss Rhode Island Jessica Marfeo, for her platform B.F.F: Be Friends First- Promoting Health Relationship Education and Mentoring, which promotes the importance of providing our youth with a strong health education system facilitated with mentors to teach future generations how to maintain healthy relationships.  She won a $2,000 scholarship as recognition.  The 1st Runner-Up was Miss South Carolina Brooke Mosteller, for her platform GO HIGHER! College Application Day, which sheds light on the difficulties of the college application process and attempts to help high school students with that process.  She won a $4,000 scholarship for her work with her platform.  And the winner of the Quality of Life Award was Miss Michigan Haley Williams, for her platform Through a Child's Eyes: Conquering Childhood Grief.  Miss Michigan has used her platform to be a champion for children faced with the loss of a family member and how to overcome the grief of their loss.  She won a $6,000 scholarship in recognition of her work with her platform.

Miss Idaho Sarah Downs won the Fourpoints Award, which goes to the girl who best represents the four points of the crown (service, style, scholarship, success) through her platform.  Sarah's platform is Promoting Nutrition: Taking Back Our Health.

Miss America has come under fire in the past for being unclear about exactly how much scholarship money is being given out and how it is used. John Oliver, YouTube personality, infamously roasted Miss America for lack of transparency in a long bit for his show back in 2014.

The newest additions to the Board of Trustees

Nina Davuluri, Miss America 2014 and Dan Meyers, Vice President of the DCI Group have been appointed trustees in the Miss America Foundation Board. Dan has been working for the Miss America Organization by supporting the communications strategy and public relations while emphasizing the organizations education mission.

Nina has spent the past year promoting her platform "Celebrating Diversity through Cultural Competency." She spoke at over thirty colleges including: Yale, Duke, UPenn and she will be speaking at Harvard on Monday regarding raising awareness about diversity. She also has a partnership with the US Department of Energy and the US Department of Education promoting STEM (Science, Technology, Engineering and Math). She worked with many charities in America as well as India promoting equality in education. Dan and Nina will start working for the board immediately. In addition, former Miss Arkansas, Regina Hopper was appointed chair of the Miss America Foundation Board of Trustees. For more information on the Miss America org go to www.missamericafoundation.com
×
×
X