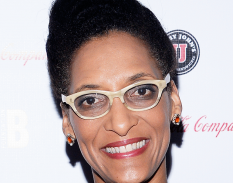 Carla Hall is an American chef, television personality and former model. She appeared in the fifth and eighth seasons of Top Chef, Bravo's cooking competition show. She was a cohost on The Chew, a one-hour talk show centered on food from all angles, which premiered on ABC in September 2011

I had to convince Stacey to take on her first under 2 year old and I’m so glad we pushed her. She has been beyond wonderful with my daughter (who’s now 4). We have won several titles under Stacey’s guidance and coaching including IJM Pacific Northwest Petite Princess and a National title with Regal Majesty. Beyond the titles we gotten so much more from coaching with Stacey- Harper has gained confidence, poise, and most of all an amazing role model and friend. If you coach with a Stacey you won’t be disappointed and you will get more than just a pageant coach. She goes above and beyond for every single one of her clients.

Two years ago my teen decided she wanted to do pageants. I thought we could figure it out on our own, I was wrong. After some misses on our part, and watching Stacey's clients win time and time again, we decided to try coaching with Star Shine. It has been AMAZING!!!!! Stacey is the perfect coach. She spends countless hours helping with everything from outfits, to routines to everything in between. If you have thought of coaching but aren't sure if i's worth it, try Star Shine, you won't be disappointed.