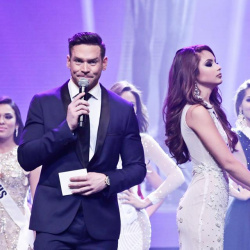 Lowry says that Caride wasn’t a good fit for the organization. There were several occurrences that led to this decision, but telling the national media that “she doesn’t love the cameras” was the deciding factor. Lowry says “That is a big problem. Miss Puerto Rico is a public figure and part of your job is to be in front of the camera.”

Caride was asked to apologize, but she did not. During her reign, she also refused to use the salon that PR Crown Entertainment paid for and used her own personal stylist instead. She failed to show up to an appearance for a TV program because she claims traffic made it too difficult to get to the studio.

Although a shoe company paid for the rights to use Caride’s image, they decided against it because she was considered a “risk” due to her behavior. Caride was also reported to have canceled several appearances because of doctor’s appointments that she could not reschedule.

The 24-year-old beauty queen defended her actions by saying that beauty queens are allowed to have bad days too. She apologized for letting her feelings come before her job. In July 2016, Caride filed a lawsuit to be reinstated as Miss Universe Puerto Rico 2016.

On Tuesday, September 13th, a judge dismissed the $3 million lawsuit. He stated that Caride’s behavior and attitude problems violated her contract agreement with PR Crown Entertainment. The organization was justified in stripping her of her title. The decision concludes a nearly week-long trial.

Kristhielee has been replaced by the 1st Runner-up, Brenda Jimenez. Jimenez will represent Puerto Rico in the upcoming Miss Universe pageant.