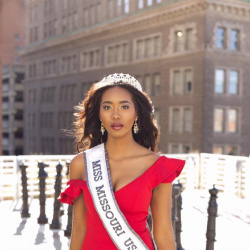 In 2013, Bayleigh Dayton entered the Miss Missouri USA pageant in hopes of becoming the first African-American woman to win the title. That year she made the Top 16. Last year, Dayton was named 1st Runner-up and Miss Congeniality. On September 25, Dayton accomplished her goal and made history by being crowned the first African American Miss Missouri USA. Bayleigh is a 23-year old graduate of Baylor University with a degree in Business Administration. She competed as Miss Kansas City in the state competition this past weekend.

During the swimsuit portion, Dayton sported a yellow two-piece suit. She wore a turquoise Jovani gown during the evening wear competition. Dayton said that this year, she did not feel the same pressures as she did from previous competitions. She said, “When I made Top 5 last year, I knew that I could do this. The insecurities weren’t there. It was easier for me to focus this year.”

During her reign, Bayleigh is excited to make an impact on the community with this title. She wants to be someone that girls can admire. “I’m obviously the first African American titleholder in this position. Now girls have someone to look up to and can have an actual role model.”

She also added, “I want everybody to know that yes. I am a queen, but I am a queen for the people and I am here to serve.” Before winning the state title, Dayton was a flight attendant for Delta Airlines and a print model, appearing in campaign ads for Hallmark. She will go on to compete for the title of Miss USA in 2017.