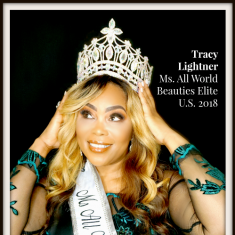 Tracy is a leader in the communities in which she resides. For over a decade, she has led others in the fight against obesity. She founded the organization ThickHealth.org! where she and her two daughters met with city officials, schools, businesses, churches and the public to provide services and resources such as the ThickHealth.org! Healthy Me Walk-a-Thon, Health Fairs, Networking Events and more. Her efforts have been reported on by major networks such as FOX, CBS, NBC, TBN and other media outlets. She continues to inspire and transform generations through her S.T.E.P.S. Parental Engagement Program.

Tracy represented Texas at the 2018 All World Beauties Pageant this March and won! Her current title is: Ms. All World Beauties Elite U.S.! She won the talent competition for her piano piece composed to honor her great, great, great-grandfather, Isaac Toland. Isaac was emancipated from slavery in 1865 and soon acquired over 70 acres of land of which he donated some of it for the first church, cemetery and school for freed slaves. She titled her music composition, "Isaac's Song." Learn more about Isaac Toland at: http://www.coloradocountyhistory.org/biographies/toland_isaac.htm. Tracy also won the "Community Service" award for all of the work she has performed in the communities in which she lives.

What is the Occupation of Tracy Lightner

Which School Did Tracy Lightner Attend?

I embarked upon this journey to promote my platform of Parental Engagement. Parental Engagement is needed now than ever before. Children are starving for instruction, direction and parents who will remain focused and engaged with them. I have raised two successful daughters as a single mother and though it was not easy, they were young entrepreneurs, pursuing their bachelors and their masters/doctoral degrees and currently own and operate their own hair line business THICK Virgin Hair Company. This was not an easy feat but it is rewarding. I want to help other parents with their journey!