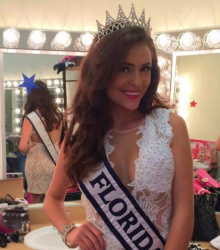 Favorite Color: Blue
Favorite Book: The Secrets
Favorite Workout: Anything Outdoors, which includes hiking California mountains, to swimming in the “Shark Bite Capitol of the World,” or my home waters, New Smyrna Beach, Florida.
Education: University of Florida, B.S. in Public Relations
Occupation: Model
Hobbies: In the small amount of time that I do have, I enjoy volunteering, singing, dancing, and boating.

Tia was crowned Miss Florida US on March 30th, is excited to spend her year traveling around Florida to encourage students to follow the right path; though she’s ventured up the East Coast reaching Toronto, and over the entire West Coast in her short reign, so far...Ten years ago, McDonald started a pageant for special needs people called Our Shining S.T.A.R.S, which has crowned more than 500 kings and queens to this date. The pageant was created to allow mentally and physically challenged children and adults the opportunity to have their shining moment on stage.
At age 15, McDonald started a cheer team for underprivileged girls that won first place at state championships, three weeks after forming. Collectively, McDonald has individually raised more than $100,000 for people in need, not including the five cars given to families in need that have wheelchair lifts, hand-gas and hand-brakes.

She has won the President’s Bronze, Silver and Gold award, Governor’s Point of Light Honor, a proclamation from the mayor and the Medallion of Excellence for her community service efforts. She is looking forward to acquiring and someday owning a public relations firm that concentrates on non-profit organizations. Last summer, she interned at the Special Olympics, where she specialized in managing events and social media. Tia graduated The University of Florida in May 2014, with a degree in Public Relations.

Currently, Tia is modeling full-time through print, commercial and television work. She enjoys racing events, and was a podium official race model for the 24 Heurs of Lemans in France, as well as, a Covermodel for the book “Once Upon a Time,” shot in Australia. She is thankful for the opportunities, and experiences that her work has led her to, and looks forward to speaking with, and inspiring children in the places that she visits.

Which School Did Tia McDonald Attend?