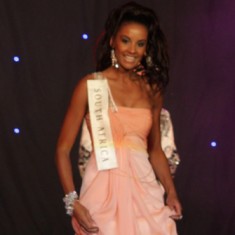 She also represented her country in Miss World 2008 in her hometown, Johannesburg, South Africa, on 13 December 2008 where she placed among the top 5.

Scroll down to see other pageants Tansey Coetzee has competed in and how she placed.

Designer for House Of Tansey Simone; She is a mom