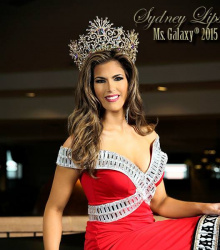 
Sydney Lipsey is the co-owner of Noetic Health, and is the director for the company's Maternal Infant Health Program.  She earned a Masters degree in Social Work from Michigan State University in 2008 and specializes in mental health, infant mental health, and maternal and infant services.   Sydney has been determined to change the world since she was 10 years old when she founded The Endangered Animals Club at her telemetry school.  The club had approximately 25 members and raised enough money in the first year to purchase 90 acres of South American Rainforest, which the school still owns.

Sydney is also very involved in pageantry, where she has been a contestant, judge, and coach, and is the current reigning Ms. Galaxy International 2015.  In 2013, Sydney won the Miss Michigan Galaxy title placing 1st runner up at the international finals. She returned in 2015 to compete as Ms Galaxy U.S and won the title of Ms Galaxy International 2015. She is very excited to use this title as an opportunity to inspire those around her to work toward their dreams.  Sydney also plans to raise awareness of the importance of prenatal care as well as infant safe sleep practices.