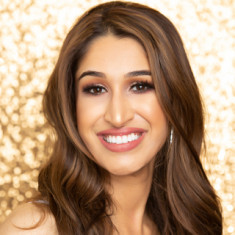 Sheerin Hai moved to Calgary at a very young age , growing up she found herself extremely grateful to be a part of the Canadian multicultural and the profound diversity! She was able to turn her dreams into reality when she became a delegate of Miss Universe Canada. Sheerin is passionate about giving back to the community and would do so by volunteering.

Sheerin was always passionate about her career working at the bank, and had experienced varies roles of being within the bank, she now is an experienced Financial Representative. She is well known among her clients for her exceptional customer service as well as delivering outstanding performance. She is a recent business graduate, finished her studies in Business Administration – majoring in Financial Services at SAIT Polytechnic and now is determined to further advance her career in the banking world.

Sheerin strongly believes in the education system as it is a great asset to have and that is what drove her to take part in the United Way Campaign. Sheerin was determined to improve the lives of the high school drop out rates among youths , she took part in the campaign by being a mentor and also displayed this campaign at her workplace to raise awareness for this organization.

It’s not just about her smile but rather her motivation, her courage and her confidence that makes her an enthusiastic individual. From an early age Sheerin was determined to accomplish everything on her own and that is what drove her to becoming successful thus far in her career. Having experience on the international pageant and being crowned Miss Culture World Canada title, Sheerin aims to accomplish her life long goal of representing Canada in the most unique way by becoming Miss Universe Canada!

What is the Occupation of Sheerin Hai