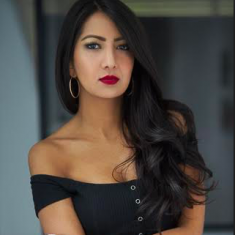 Raven Thiara is the eldest of three, born in New Westminster, British Columbia. A first generation Canadian, raised by a mother who immigrated from Punjab, India. Her traditional upbringing yielded strong family values and relationships with both her younger siblings. A deep interest in modeling contrasted with this conservative culture but taught Raven independence and perseverance as she garnered opportunities to model for a number of designers from Vancouver, Los Angeles, and India. Raven paired her modeling abilities with her philanthropic endeavors by walking runways for numerous charity organizations such as Children of the Street Society and the BC Cancer Society. The confidence gained through modeling and the dedication learned through volunteerism naturally led her into the world of pageantry.

Aside from the aforementioned interests, academics have always been of importance, becoming multilingual at a young age through French immersion encouraged Raven’s love for linguistics. Because she enjoys a challenge, Raven transitioned into the rigorous French immersion international baccalaureate program for her high school education. Through this passion for education Raven was provided early acceptance to The University of British Columbia. In university, Raven studied political science with a focus on international relations and social justice. Upon graduation, Raven continued to pursue her passion for education through her graduate research; which works to counter the fundamental claim underlying current free trade regulations that insists unrestricted international trade is conducive to equal productive growth for all participants. Instead, Raven argues that current free trade regulations have facilitated and exacerbated the commodification and trade of human bodies for the purpose of sex-trafficking by establishing trade infrastructure in politically volatile and vulnerable regions of the world. Subsequently enticing developing economies to participate in markets with unfair competition levels. Raven deduces that the consequences of these skewed trade agreements include the destruction of the sustenance economies of these developing nations while increasing the economic divide between developed and developing. Through historical and statistical analysis, her research concludes that the globalization and the liberalization of markets at such an unprecedented level has led to the increased commodification and trafficking of female bodies. Raven’s research has presented her with exciting opportunities, including an invitation to a private conference held by The Nature Conservancy; where she was provided a seat to speak on issues of international importance alongside heads of industry and leading members of Canada’s political arena. Through this experience, Raven learned the importance of using the privileges and power of the corporate world to foster social change through thoughtful altruistic endeavors.

In her professional life, Raven is a growth consultant, working with executives in a range of disciplines (from the entertainment industry to the natural resources sector) to create inclusive, productive workplaces through cultural sensitivity training and internal restructuring. Her profession has taught her to make wise investments in appreciating assets such as real estate, that have in turn provided returns used to improve the lives of her family and community (through volunteer work, fundraising and direct donations). With her diverse resume, Raven hopes to share her experiences with others, teaching the importance of financial literacy to foster a generation of wise, independent women who understand the importance of corporate responsibility and giving back to one’s community.

What is the Occupation of Raven-Thiara