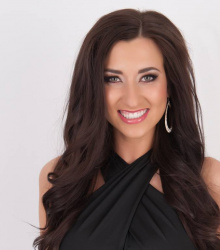 Miss Provo 2016 is Madison Monson!
Madison Monson was crowned as Miss Provo on May 30, 2016. She is currently a junior at Brigham Young University, where she is pursuing a degree in marketing. Madison is passionate about dance and has been dancing since the age of two. She performed the classical Kitri Act 1 variation en pointe for the talent portion of the competition.

Madison's platform is called, "Read to Succeed: Advocating Literacy in our Community," and she has worked closely with ten elementary schools in the Nebo and Provo school districts and the Springville and Provo City Libraries to improve reading scores and literacy habits in her community. She is a certified tutor through Project Read Utah and hosted a book drive, which raised over 1,000 for a Title One Elementary School.

"Read to Succeed: Advocating Literacy in our Community"

Which School Did Madison Monson Attend?