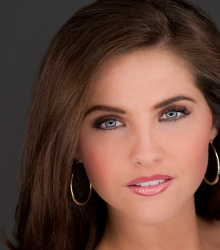 Her father is George Frazier, a former professional baseball player who pitched in the Major Leagues from 1978 to 1987 and now serves as a television commentator for the Colorado Rockies.

Frazier attended the University of Oklahoma for her first two years of college. In August 2011, doctors discovered that Frazier had early-stage cervical cancer. She continued her studies and pageant career while receiving treatment for her cancer. The cancer recurred in July 2012 but she is currently in remission. After winning a scholarship to Oral Roberts University during the Miss Oklahoma 2011 pageant, she switched schools for her junior and senior years. Frazier graduated from ORU in 2014 with a bachelor of arts degree in mass communications with a minor in humanities.

She works in marketing at Celebrity Attractions and is engaged to a Tulsa Firefighter.

She was also Miss Oklahoma's Outstanding Teen 2009 and made the top 16 at National Sweetheart 2015.