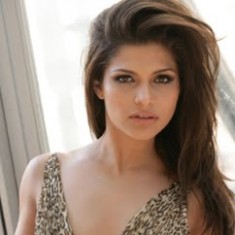 Walcott follows in the footsteps of Valene Maharaj and was the 2008 entrant into the Miss World pageant. She placed as the 2nd runner-up to Ksenia Sukhinova of Russia. She won the titles of Miss World Caribbean 2008 for getting the highest placement of the Caribbean delegates; and Miss World Beauty with a Purpose 2008 for working with the Just Because Foundation dedicated to create hospitable conditions for children with cancer and helping raise $100,000 in charity for the creation of a new ward for these children.Overall she place in all the fast track events.

In 2011, Walcott participated in the Miss Trinidad & Tobago Universe Pageant. As a highly rated participant, she won the crown and represented her island nation in the Miss Universe 2011 Pageant held at Sao Paulo, Brazil on 12 September 2011. Unfortunately did not make the cut.

In June 2013 Gabrielle married power-boat racer, Lee Pollonais; She is the oldest of her three siblings; She is a professionally trained model but is not signed to any modelling agencies.