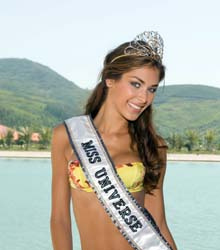 Mendoza beat 27 other candidates to win Miss Venezuela 2007 on September 13, 2007, and became only the second woman representing the Amazonas state to win, following Carolina Izsak in 1991. She was crowned Miss Universe 2008 at the pageant at the Crown Convention Center, Nha Trang, Vietnam, on July 13, 2008. Mendoza became the first winner of the pageant from Venezuela since Miss Universe 1996's winner Alicia Machado, thus making her the first Venezuelan Miss Universe in the 21st century.

Miss Universe 2007 Riyo Mori crowned her with a tiara worth US$120,000. Her prize package includes cash, a year contract promoting Miss Universe, world travel, a rent-free prestigious New York City apartment, luxury apartment, and a gift bag stuffed with designer shoes, dresses and beauty products, a US$100,000 stipend for a two-year course at the New York Film Academy and free access to famous fashion houses and beauty parlors. Mendoza will spend her year-long reign traveling the world to lecture on humanitarian issues and to promote education regarding HIV/AIDS.

As of June 2009, Mendoza as Miss Universe has traveled to Indonesia, Singapore, Italy, Vatican City, Spain, France, Nicaragua, Ukraine, Czech Republic, Bahamas, Russia, El Salvador, the United Arab Emirates, Brazil, the Dominican Republic, Puerto Rico, Bolivia, Argentina, Romania, and Vietnam, in addition to numerous trips around the United States and her homecoming in Venezuela. Together with Miss Universe 1969 Gloria Diaz, Mendoza was also used as the goodwill ambassador of Venezuela-based technology firm Smartmatic to thank the Philippines for entrusting the company the success of their 2010 presidential elections. 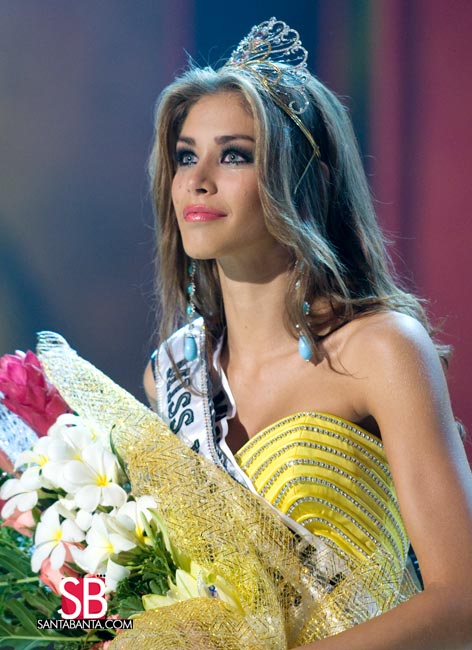 On June 3, 2012, Mendoza served as one of the panel of judges for the Miss USA 2012 competition. Mendoza was once kidnapped in Venezuela, and stated that it's psychological trauma taught her to remain poised under pressure.Mendoza was a contestant on the 2012 season of the NBC reality competition series The Celebrity Apprentice.