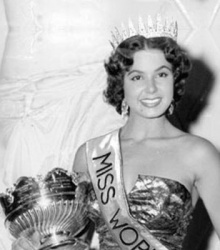 Antigone Costanda is an Egyptian designer, model and beauty queen who won Miss World 1954. The pageant took place on October 18, 1954 in London, England with the participation of 16 contestants. In addition to Arabic, Costanda speaks Greek, English, Italian and French fluently. The Greek-Egyptian beauty was the first Miss Egypt candidate to win the title of Miss World for Egypt.

According to Eric Morley's 1967 book, "The Miss World Story", Costanda was positively beaming as she claimed that her victory was also for the Miss World 1953 second runner-up status of Marina Papaelia.

The following year, during the 1955 Miss World beauty pageant held in London, Costanda did not attend the event because of political hostilities between Egypt and Britain over the Suez Canal. Neither did the Iolanda Gigliotti, later known as Dalida, the Miss Egypt 1954. British actress Eunice Gayson crowned Miss Venezuela as the new Miss World.

Prior to winning Miss World, Costanda was gaining experience in the modelling profession and was appearing in numerous publications. Winning Miss World further helped her to reach the top of her profession, becoming a successful model in the Middle East, France, Italy and Greece. Her career in later years moved into interior design. Sh