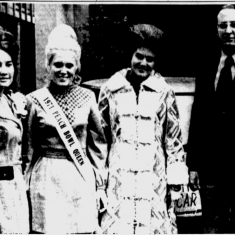 For the second time in its 4-year history, a Floyd County Contestant has won the competition for Peach Bowl Queen.

Lisa, who was crowned the district winner in competition in Atlanta on Oct. 9, 1971, was first runner-up this year in the Miss Georgia pageant, third runner-up in the Miss Dogpatch U.S.A. competition and is the reigning Miss Shorter College.

Kippy Scarborough, formerly of Rome, was Peach Boolw queen in 1969.

Lisa, was chosen over fiver other princesses to reign over a parade down Peachtree Street and at the football game on Thursday night between Georgia Tech and Ole Miss.

A five-foot, five-inch green-eyed blonde, she is a member of Pi Sigma Sorority and is active in the Miss Seventeen competition in Evansville, Indiana at the age of 14, and has modeled for several stores in Indiana.

She's the daughter of Donald Lawalin of the Georgian Apartments and Mrs Nita Lawalin of Tell City, Indiana.