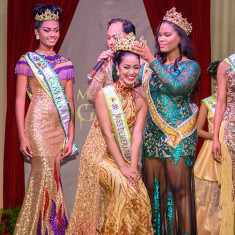 Miss World Guyana 2017, Vena Mookram
The Miss World pageant is the longest running major international pageant. Miss World was created in 1951 by Eric Morley in the United Kingdom. Since his passing in 2000, the Miss World pageant has been run by co-chair and Eric’s wife, Julia Morley.  Miss World, and the Miss World Organization, work to raise money for children’s charities, and have raised more than 250 pounds (4 million U.S. dollars) since its creation in 1951.
Location
Most recently held in the same city as its headquarters in London, United Kingdom, the Miss World pageant is one the most publicized beauty pageants in the world. The newly crowned Miss World also fulfills her reign while residing in the headquarters in London, United Kingdom. The newly crowned Miss World also works closely with "Beauty with a Purpose". Established in 1972 by Julia Morley, Beauty with a Purpose works closely with many charitable organizations, primarily to give back to children around the world.
Charitable Causes
Beauty with a Purpose has helped in funding Cleft Palate Teams in South America, Sri Lanka and Russia, done three fundraising tours to support abandoned and neglected children in Vietnam, and provided long term support for both Operation Hunger and the Nelson Mandela Foundation in Africa. Additionally Beauty with a Purpose teamed up with Jackie Chan and the Chinese Red Cross in bringing financial aid to those most seriously affected by the Asian tsunami.