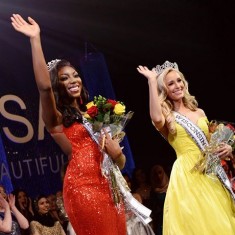 At this year’s pageant we are holding a special People’s Choice competition! Online and onsite, we will be collecting your votes for your favorite contestants for the People’s Choice in both the Miss USA and Miss Teen USA divisions. This year, the winners of the People’s Choice voting will be guaranteed a spot as a semi-finalist in the Pageant Finals!

Voting will take place online and onsite until 9am CDT on Sunday, September 8th. Cast your votes before 9am for your votes to count. The winners of the People’s Choice for each division will be revealed during the announcement of the semi-finalists as well as recognized during the awards portion near the end of the Pageant Finals!

To vote online, simply click the vote button next to your contestant. You will be redirected to the Pageant Planet website, who are hosting this year’s People’s Choice voting.

During this year’s pageant, if the contestant numbers dictate, it may be decided by the judging panel to allow all the state contestants to advance to the Pageant Finals. If so, the winners of the People’s Choice voting will still be announced at the start of the Pageant Finals as well as recognized during the awards portion near the end of the show.