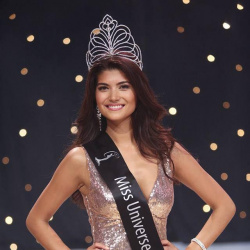 See Narissara's profile, including pageants she has competed in here!

Over 3 days, the contestants undertook challenges including a fitness challenge as well as the NOT IN VAIN empowerment day. The contestants also worked hard in the run up to the competition to raise funds for the pageant's nominated charity Strongbone's Children's Charitable Trust. The overall total raised by the finalists was in excess of £10,000!

During the live final, the contestants compete in and opening round, swim wear round and evening gown portion.