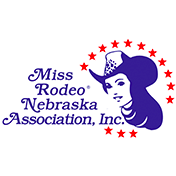 Mission Statement:
To provide an opportunity for young women of high moral and ethical
character to promote Nebraska and the sport of rodeo.
The concept of Miss Rodeo America was developed in 1955 by a group of gentlemen under the name of International Rodeo Management (IRM).
The same year, the town of Burwell, Neb. selected its first Miss Rodeo Nebraska: Dallas Hunt George of Lincoln, who held the MRN title in 1955 and 1956.
She won the regional title in Omaha at the AK-SAR-BEN Rodeo in 1956 and went on to compete and win the Miss Rodeo America title in 1957.
Laura (Lolly) Cameron Klug won the MRN title in 1957. She also won the Regional title at AR-SAR-BEN and competed at the Miss Rodeo America Pageant. In 1959, she was named as the Buffalo Bill Rodeo Queen and given the title of Miss Rodeo Northwest. She then competed again at the Miss Rodeo America Pageant, where she was second runner-up.
The MRN Pageant has continued every year since its humble beginnings. The goal of it is to select a young lady with the desire and enthusiasm to serve as a goodwill ambassador for the sport of rodeo and the state of Nebraska.
In 1991, after Burwell had hosted the pageant for 36 years, the pageant was moved to North Platte so it could be presented in conjunction with Nebraska’s official state celebration, NEBRASKAland DAYS and the PRCA Buffalo Bill Rodeo.
Also in 1991, NEBRASKAland DAYS started a tradition of presenting a $1,000 scholarship to newly crowned MRNs. The MRNA Scholarship Program has continued to grow and now awards more than $5,000 in scholarship money.
In 2000, the pageant schedule was changed from three days to four days. In 2006 the Miss Rodeo Nebraska Association, Inc. expanded its program to include the Miss Teen Rodeo Nebraska Pageant.