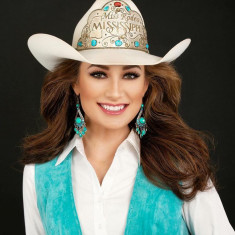 According to the Miss Rodeo America Rules and Regulations book, rodeos have often selected queens-even as far back as the days of the untimed bronc riding-but they seldom got beyond the local or state level, and not until 1955 did they reach a national level of competition.

2005 marked a new era for queening in Mississippi, as two former Miss Rodeo Mississippi’s joined together to form the Miss Rodeo Mississippi Association. DeShannon Davis, along with Sarah Johnson Gatwood, began their quest in March to form a pageant committee, as well as find a deserving young woman to represent our State at professional rodeos, and at the 2006 Miss Rodeo America pageant in Las Vegas, Nevada, in December. Cari Keyes, 20, of Vicksburg, was called upon to serve her State as Miss Rodeo Mississippi 2005. She began her reign, May 1, 2005.

With careful forethought and consideration by the MRM Board of Directors, 2013 brought about a new era in rodeo queening in the state, as the board voted to change the organization's name to the Miss Rodeo Mississippi Foundation. The foundation was established to preserve and promote the sport of professional rodeo, which stands for family, hard work, values, and commitment, in the state of Mississippi. The foundations' mission is to provide scholarship awards for young Mississippians to maximize their educational potential, develop their public relations skills and public speaking ability while producing ethical, responsible, and hardworking citizens, who desire to be role models and leaders for our state and/or country.

2014 was another BRIGHT year in MRM History. Mississippian, Paige Nicholson, claimed the title of Miss Rodeo America; bringing the title back across “The River” for the second time in four years. Nicholson, a graduate of Mississippi State University, grew up on a dairy farm and competed in a multitude of 4-H contests, showing cattle. Six years ago she entered her first queen pageant at the high school rodeo level. Her titles include the 2007 Mississippi High School Rodeo Queen, 2009 Miss Teen Rodeo Mississippi (Jackson’s teen queen during her reign as Miss Rodeo Mississippi 2009) and 2012 Miss Dixie National. Paige won the Horsemanship and Personality portions of the Miss Rodeo America Pageant. Although Mississippi was unable to send a 2014 representative to the National pageant, the Dixie National queens did a tremendous job representing professional rodeo and the Tri-State Rodeo Association throughout the year. Taylor McNair, reigned as Miss Dixie National, while Summer Weldon, of Martin, Tennessee, won the Jr. Miss Dixie National title.

For the first time since 1974, Mississippi crowned her first Summit, MS, native. Laura Sumrall, the 22-year-old daughter of Hiram and Dr. Dawn Sumrall of Summit, and a graduate of Texas A&M did an excellent job representing our state throughout her reign and at the Miss Rodeo America pageant. In conjunction with the 50th Anniversary Dixie National Livestock Show and Rodeo, Summer Weldon, from Martin, TN, and Gracie Newell, of Meridian, proudly represented one of the greatest rodeos in our country during the week of February 12-18, 2015.

Despite not having a Miss Rodeo Mississippi in 2016, the MRM Foundation Board, under the guidance of new National Director, Allison Coulton, had two talented Miss Dixie queens that promoted rodeo throughout our state. Mary Ashley Rohrscheib, from Cullman, Alabama, and student at Wallace State Community College, held the title as the 51st Miss Dixie National. Joining Ashley for the week-long duties, was Brookhaven native, Makenzie Richardson, as Jr. Miss Dixie National. The MRM Foundation Board elected Laura Sumerall Muntean and Laura Hankins Priscock to a four-year term, replacing Cathy Brown and DeShannon Davis. Sadly, tragedy struck our MRM family, as we lost one of our precious Rodeo Sweethearts, twelve-year-old, Carmen Elizabeth Smith. Her legacy and love for all things rodeo queen related will live on as each year a memorial award will be presented to a deserving contest in the Dixie National pageant in Carmen's name. Be Kind...Help a Strange...Have a Godly Attitude -- Carmen Smith