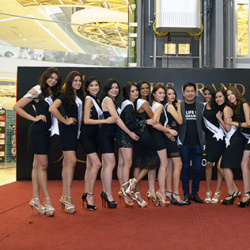 At almost every pageant you make friends with your fellow contestants, but not every day do you compete alongside your best friends. That is the case for two girls going to compete for Miss Grand Malaysia 2017.

Julian, 20, finished as the winner, Miss Grand Sabah 2017, and John, 25, finished as 1st Runner-up, Miss Intercontinental 2017. Both girls will advance to the national pageant later this year to represent Sabah. In addition to a 1st Runner-up placement, John took home the Best Evening Gown and Miss Popular Audience awards.

Both women were asked their secret to win the crown. Julian said, "My secret is being confident even though there are a lot of competitors out there." John added, "Actually there is no secret. It is just about hard work, confidence, and you just have to be yourself." For aspiring pageant queen hopefuls, Julian added, "If you are brave and confident enough, you will win."

The duo has been featured in local papers and on both the Miss Grand Sabah and Miss Grand Malaysia Facebook pages. They are both excited to start preparing for the national pageant and perhaps represent Malaysia on an international level.

About the Miss Grand Malaysia Pageant

The pageant has a motto every year, and this year's motto is "Stop War and Violence." Miss Grand Malaysia hopefuls will participate in a lot of charity work in preparation for the national pageant later this year. No date or location has been announced for the pageant so far, so be sure to keep an eye out for updates.

We'll be watching to see if one of these beautiful ladies will have the opportunity to represent her country later this year.