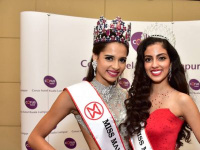 Tatiana Kumar was stripped of her crown after reportedly releasing offensive comments about the Miss World Malaysia organization online. The announcement was made through Instagram and deemed effective as of March 6, 2017.

Born to an Indian-Malaysian father and French mother, Tatiana Kumar stand at 5’ 9” (176 cm) and only 18 years old when she won her Miss Malaysia World title last year in August. She then competed in the Miss World finals in December held in Maryland, USA. Tatiana, with her towering height, is a part time model and first time beauty queen.

During the Miss World 2016 competition where a multimedia challenge was included, Kumar released a statement through her Facebook account saying she was not granted access to her own Facebook page. This earned negative criticisms towards the Miss World Malaysia organization. Complaints on the official page of Miss World Malaysia coming from viewers all over the world flooded after knowing that their representative is not one of the page admins and called it a “fake account.”

The organization cited a breach of contract committed by Kumar. Based on reports, the former Miss World Malaysia and her family allegedly made negative comments towards the director and the organization as a whole. These comments were posted and seen online. (Read: A Pageant Girl’s Guide To Social Media)

Kumar took her stand on the issue through Facebook. She released an official statement on her account that the reason for her termination is “wrongful and wholly unjustified.” All allegations against her, which are now circulating through social media, are not true. Kumar and her family will be seeking legal advice and has thanked the public for their support throughout her reign as Miss Malaysia World 2016.