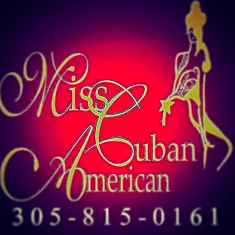 The Miss Cuban-American Pageant is a contest of beauty, poise, and prestige.

Miss Cuban-American International Pageant was founded and registered in 1985 with the State of Florida by Gloria and Mario Princigalli, whom through this event reflects the best of the Cuban ideals and traditions in exile. Although the pageant is held in Florida, this pageant is open to all contestants of Nationwide of Cuban Decent. Today, more than ever we support the wholesomeness, educational goals and personal achievements of our young Cuban American men and women encouraging them to preserve the pride of their roots and their native customs.
The Miss Cuban-American Pageant is a contest of beauty, poise, and prestige, making the contestant aware that there is far more to the pageant than a crown, banner, roses, and walking down a runway. The pageant provides them with personal and intellectual growth as well as financial assistance as an additive option pertaining to their particular educational goals.
After her debut, the Miss Cuban-American queen embarks on her year long whirlwind international tour participating in various other beauty pageants nationwide presenting the image of all Cuban-American Women.
The Miss Cuban-American Pageant is recognized by several institutions, cities, states, and foreign countries around the world. On June 26, 1990, the cities of Miami, Hialeah, Hialeah Gardens, Virginia Gardens, North Miami, Key West, and Miami-Dade County proclaimed this day to be "MISS CUBAN-AMERICAN DAY."