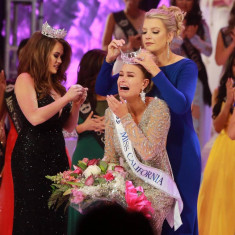 Miss California 2018 is MacKenzie Freed. Freed, who competed as Miss Treasure Island 2018, walked away with $22,000 in scholarship monies and the privilege of competing on the Miss America stage.

Miss Orange Coast Katie Wayland was first runner-up and winner of a $7,500 scholarship.

“For Immediate Release from the Miss California Organization Board of Directors:

The Miss California Organization is incredibly saddened by the recent letter from Cara Mund, Miss America 2018. In it, she describes her year of mistreatment and workplace bullying. Cara visited the Miss California Competition in June 2018 and our entire state was proud to call her “our” Miss America. She is an unflappable, powerful advocate for truth, education and the future of women as leaders in every area of our great nation. Cara has our complete love, respect and support.

Cara’s sentiments in her letter were painful to read, and the Instagram response from the Miss America Organization was arrogant and embarrassing in that their only regret was that her words were aired in a public forum. Their lack of shock and dismay at Cara’s plight speak volumes to their complicity in it.

Before January 2018, the Miss America Program was not broken. It did not need to be dismantled into the unrecognizable format in which it exists right now. It is a 97-year tradition that is known to almost every American. It is an institution that symbolizes an ideal “American Woman” to which we want our daughter to aspire.

In California, this ideal is thriving, healthy and relevant. We want the same for our national organization, but this will not be achieved with the current leadership team in place. Although we believe that their intent, initially, was to restore public faith in the Organization, their apparent need to stray from ownership of who Miss America truly is was unfortunate. Miss America should be beautiful - there is nothing wrong with that; she is well spoken, articulate, educated, personable and uses all of these qualities to enhance her power.

It is further clear that the current national leadership does not understand or appreciate the value of more than 250,000 volunteers who have built the Miss America Organization over the last 97 years. These volunteers are major stakeholders in the Organization, and there is little regard for them as such.

The Miss California Organization is calling for the resignation of Gretchen Carlson and Regina Hopper on September 10, 2018; installation of Cara Mund as the new interim chairman of the board of directors; installation of a new interim Chief Executive Officer and development of a search committee for new permanent national leadership. This search team must consist of stakeholder representatives from all levels, including state executive directors, former Miss America’s and state titleholders, sponsors and others who care deeply about the future of this iconic tradition. A reasonable time frame to achieve this permanent transition must be established, and the new leadership must elected by the 51 State Boards of Directors and all former Miss America’s.

We believe that this is the only way that Miss America will see its 100th anniversary.”