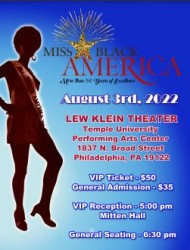 The Miss Black America Pageant commenced during the pivotal year 1968. We continue to provide a stage of opportunity until this day and into the future. Are YOU the Next Miss Black America? Register Today! You are the one you are waiting for! Join the ranks of Oprah Winfrey, Toni Braxton, Bernadette Stanis and many more. https://www.missblackamerica.com/pageant-registry

Ryann is a Consumer Technology Marketer, Entrepreneur, and Advocate for diversity and inclusion in business and tech. She's held marketing leadership roles for some of the most recognizable brands in the world including T-Moble and Uber. She now serves as Vice President of Marketing for Victor, a $100M travel technology company and the global leader in private charter technology. In 2018 Richardson was named one of the Most Influential Black Executives in Corporate America by Savoy Magazine.

As an Advocate, Ryann's personal mission is to introduce more girls and women, minorities and children from undeserved communities to a world of possibilities in technology and business. She served on the employee-led diversity and inclusion Task-force at Uber and frequently speaks on panels and in business forums discussing issues of education, professional development and opportunity for underrepresented populations.

A strong believer in pageantry as a vehicle for women's empowerment and capacity building, Ryann has spent years in the pageant community serving as a title holder, volunteer, and judge, while pursuing her undergraduate degree at Philadelphia University. Ryann was crowned the 88th Miss Philadelphia, she was a 6-time Miss America State Pageant Runner-up, a 4-time state swim-suite award winner and a 2-time state talent winner.