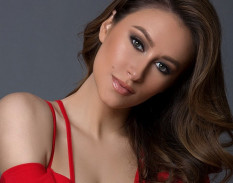 Long before I was Miss Montana USA, I was a young woman, who was 5'7, on a good day, that dreamt of a career in fashion and entertainment. Several years into a failed music career, and one unused Bachelor's degree later, I realized my dreams of stardom might never come to pass. But, in 2014 I stumbled upon YouTube and my life got flipped, turned upside down (bonus points for 90s babies that catch my reference.) I uploaded several videos, that received views, then comments, which finally lead to subscribers. The success of my channel inspired me to offer private and group pageant coaching, with a tailored approach to each client. No two contestants are the same, and I like to keep them that way, rather than creating an army of Pageant Patties. Over 500 videos later, one award for Best Social Media Content at the Global Beauty Awards, and a laundry list of clients-turned-queens, I am more motivated than ever to create positivity-centered content that helps young women within the pageant community, and those who aspire to become a girl boss and look like one too!