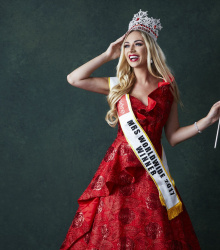 Message Claim This Profile Edit Information
Triinu Akimseu was born in a small village in Estonia in 1987. She was raised by her single mother until the age of 14, but after her death due to illness, Triinu spent her teenage years in the care of her father. She graduated high school with a degree in economy but soon realized beauty was her passion. She moved to Tallinn, the capital of Estonia, to find a job and earn money so she could attend the private school of cosmetology. When she was 23 she got a career opportunity and decided to move to Macau, China. She continued to work as a model in Asia for 2 years until she met her husband. Triinu got married at the age of 25 and soon after moved to Hawaii, where her husband was originally from.
After relocating to America, she met a lot of empowering women who made her aware of all the possible opportunities for women and gave her inspiration to achieve her dreams. Shortly after, Triinu captured the title of Mrs. World Estonia 2017 and subsequently won the title of Mrs. Worldwide International 2017. With her title, she wishes to help victims of domestic abuse and provide resources to women's emergency shelters. Today, Triinu lives in a tropical island of Okinawa, Japan, and is still happily married to a U.S. Marine, while being actively involved in the fight for women's rights.