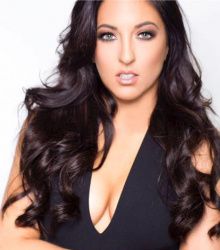 I wanted to get involved in pageantry after I met Crystal Rush (now Crystal Wright), who was Ms. United States 2015 at the time. I met her on my rookie year as a Baltimore Ravens Playmaker, the professional appearance team for the Ravens. And after hearing about how this "Queen" was going to be on our team, I had made my mind up that she was probably going to be stuck up. I was intimidated. But she wasn't. She was honestly the most genuine and sincerely sweetest person I had ever met. And after getting to know her during our "training weekend," I thought to myself, "if SHE is what pageantry is all about, I've got to give it a try."

I dipped my toe into the Miss United States system, but it wasn't until I found out about Miss Earth United States that I truly felt I found where I belonged. What I truly love about this organization is that every single delegate has the very same mission — to be an Earth Warrior fighting to keep our planet healthy and sustainable. I've competed twice on the national level, and just recently won the ranking of First Runner Up in August. And in January, I'll be joining the MEUS National Staff as their Delegate Coordinator and Official Graphic Designer. I'm very excited to continue my pageant journey, only now being able to help other girls have the same positive experience I've had.

Nix The Plastix, which aims to educate our community on the harmful effects of single-use plastic and inspire individuals to use alternative sustainable solutions.

Which School Did TraceyLee Attend?