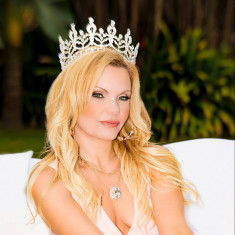 Born in Washington, DC, Raised in Gastonia, NC; I became the first female ocean lifeguard in Myrtle Beach, SC. I was always a very competitive swimmer, gymnast and dancer. Growing up I never missed watching a pageant on television and dreaming of walking a runway, now my dreams have become reality. I have held multiple titles including Miss. West Coast, Ms. Southern California 2016 and now I’m Ms. Pacific Coast America 2019 getting ready to walk in the Ms. America Pageant. I am an ambassador for several charity organizations including the Cystic Fibrosis Foundation in Los Angeles and Orange County, and Share Hope USA with feeding the homeless. My hopes are to shine light on the homeless population and mental health. Let them know there is help and other alternatives that a lot of people are not aware of.

What is the Occupation of Terri McDonald

I am a Case Manager Nurse for Charter Healthcare

Which School Did Terri McDonald Attend?

I wanted to start competing in pageants to help people, get involved in the community and to use my crown for a purpose by shining light to my cause but many others out there and let other women out there my age know it’s never too late to make a difference.

What is the Nationality of Terri McDonald