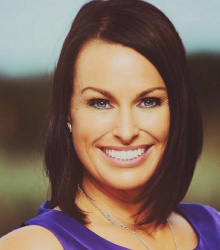 Teresa Mudrow has been involved with the industry for many years as a contestant, mentor, staff member, and judge. After competing as a teen, she spent several years working behind the scenes in the pageant world. After getting married, Teresa once again took the stage as a pageant competitor in the Mrs. division. Over the past four years, Teresa has been involved with All American & Mrs. All American Pageants. Starting at the state level as Mrs. Michigan Woman, she went on to capture the Mrs. All American Woman title in 2014. Making over 150 appearances during her reign, Teresa went on to be crowned the 2016 All American Ambassador. At the 2017 pageant, she was honored to receive the ultimate title of All American Lifetime Queen. Teresa is happy to be a part of the All American & Mrs. All American sisterhood and continue to work behind the scenes on staff.

To Teresa, the mission goes far beyond the crown and banner as she continues to bring HOPE to the community by helping other people excel. From working with the homeless community to mentoring struggling readers, she aims to help others achieve more. Teresa received her bachelor’s degree in elementary education from Warner Pacific College and her master’s in education from Grand Canyon University. She has been an educator for over 20 years, teaching all ages from kindergarten to twelfth grade. Through the classroom and community, she has been able to actively share “The Hands &Words Are Not For Hurting Project”. Her platform focuses on non-violence and abuse prevention through conflict resolution and character building. Teresa is happily married to her husband of 24 years and they live in Texas with their son and huskador (husky-lab mix). Recently, Teresa became a Zumba instructor to help other people have fun reaching their fitness goals. In her free time, she enjoys travelling to new places and watching her son play soccer.

Teresa’s platform is the “Hands &amp; Words Are Not For Hurting Project” which brings awareness to the power and value of individual choices. It recognizes that words and actions should be used to help, not hurt, ourselves and others. It focuses on prevention, while teaching conflict resolution and character building skills. Over the past seven years, she has been sharing her platform with schools, families, and other audiences. For more information, go to www.handsproject.org. Join Teresa as she continues to be an ambassador for the “Hands &amp; Words Are Not For Hurting Project”. Together, everyone can work to make a positive difference and save lives.

Which School Did Teresa Mudrow Attend?