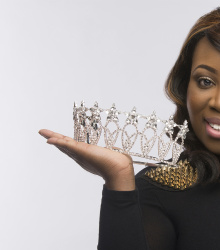 Temi Oshomoji is not your ordinary pageant contestant. She is a Single mother who has survived Domestic Violence and and Cervical Cancer. Temi decided that she needed a way to get awareness for Domestic Violence out to her community. Temi decided to compete in a local plus size pageant, called the Ms. Bella, she came in first runner up. This did not discourage her. She went on to compete in the Miss Tennessee Plus America pageant, again she placed First runner up. Now her tank was full of determination. She enetered the World's Miss Tourism Pageant system, as World's Miss Tourism Beauty Nashville 2016. She went through a year of campaigning and bringing awareness for Domestic Violence. She went to Nationals, and won. She is now, World's Ms Tourism Beauty 2017.

Domestic Violence and Violence Against Women through Africa's Daughters Foundation