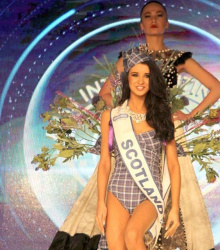 A Word from Robyn...

I am Robyn Ferguson and I'm a 20 year old air hostess from the biggest city in Scotland, Glasgow.

In my spare time I love to keep fit and like to see myself as a bit of a gym bunny as I go at least 3 times a week without fail. As an air hostess my main passion is travelling; I love all things beautiful and cultural.

I competed in my first pageant at the age of 16 and ended up taking away the title Miss Teen Galaxy Scotland 2011. It was my first ever competition so I am extremely honoured to be the first person to have this title.

Ever since my first competition I have became a completely different person. I used to be painfully shy but now I'm the kind of girl who is hard to silence! I live each day as it comes and like to make the most of what I have.

Which School Did Robyn Ferguson Attend?