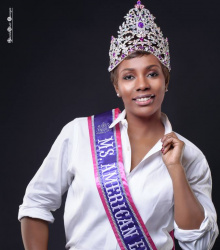 Born within the Englewood Community of Chicago, Ms. Baldwin’s love for both pageantry and for the importance of education for young women led to numerous accolades throughout her young career. Her first official national title, Ms. American Elegance Woman has positioned this intrepid and entrepreneurial young woman to national renown and is an inspiration to those young women whom she supports through educational initiatives.

Ms. Baldwin’s story of resiliency and self-determination deeply resonates with her core audience as she both passionately speaks and passionately writes on the issues relative to the needs of the Englewood community.

As an enterprising young journalist, Ms. Baldwin received national acclaim for reporting on the massive violence within the Englewood Community. Through her strategic insight and wanting to change the narrative surrounding the way her community was presented to outsiders, Ms. Baldwin created her own weekly talk radio show, airing Tuesdays at 10:15am CST entitled, “What’s Good in Englewood” on WKKC 89.3FM.

By deciding to change the narrative of how her community has been presented, Ms. Baldwin has not only established significant brand equity within her community as an industry thought leader, but she has also gained impressive experience by working for leading media outlets WBEZ 91.5FM (NPR-Affiliate), WVON 1690AM, CBS Radio WBBM 780AM, NBC and FOX News. Additionally, Ms. Baldwin has been featured in both print and trade publications including Huffington Post. She has been included within numerous documentaries, and she has been featured on Chicago’s highest-rated news broadcast, in addition to numerous national network programs.

Ms. Baldwin holds a B.A. in Mass Communications from the University of Illinois-Chicago and a M.A. in Journalism from DePaul University. With over 10 years of private sector experience within the fields of journalism, branding, promotions and building impactful public relations campaigns.

Which School Did Rashanah Baldwin Attend?