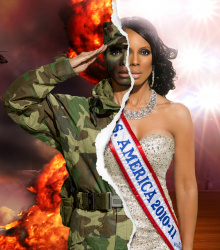 A decorated U.S. Army Officer, Raquel was honorably discharged from the military in 2002 and within months she signed with Elite Models (Atlanta) and Ford Models (New York). The 5’9” commercial model soon graced luxury lifestyle ads for 5-star restaurants, private planes, resorts, and yacht companies. She was the cover model of an international ad for the Coca-Cola brand. Her hair is now featured on two major hair product boxes and currently she is the face of Unilever "Beautifully" product's campaign in stores throughout the country.

Another win came for Raquel in September 2011, after she started her Veteran-Owned Company, An Officer and Gentlewoman LLC, (AOAGW). The company bought the rights to Mrs. DC America, an official preliminary pageant to Mrs. America. As the Owner/Operator, she is responsible for overseeing the day-to-day operations of the pageant organization. She is also responsible for producing the yearly show that publicly recognizes women throughout the DC metro area who have obtained personal, professional and community achievements. AOAGW also produces television commercials for business clientele.

Raquel is committed to her community through service and philanthropy. She is a member of Delta Sigma Theta, Inc., Military Officers Association of America and Women in Media. Raquel recently became involved in the American Foundation of Suicide Prevention, in honor of her mother who unfortunately took her own life March 2013.

Raquel’s accomplishments have been noted in both her military and civilian career. Raquel was titled a “Leader of the Future,” by Ebony Magazine and is featured in “Who’s Who of America,” for 4 consecutive years. For her commitment to fighting for Veteran's employment rights, Raquel is the “Veteran of the Year" 2011, selected by the organization Women Veteran’s Rock. Most recent, Raquel was named "People on the Move," by Washington Business Journal and was nominated as Pageant Director of the Year 2015 by Prestige Pageant Awards.

Raquel is married to attorney, Ron Thomas. They have four children in their blended family and a robot name R2.